We want to ensure your time on our site is enjoyable. That’s why we and our service providers gather visitor information with help from cookies. Cookies are used to analyse the use of the website, to communicate relevant marketing information and provide enhanced functionality. Of course, you can control what we collect. Adjust your settings below.

Read OK! magazine on Readly - the ultimate magazine subscription. 1000's of magazines in one app 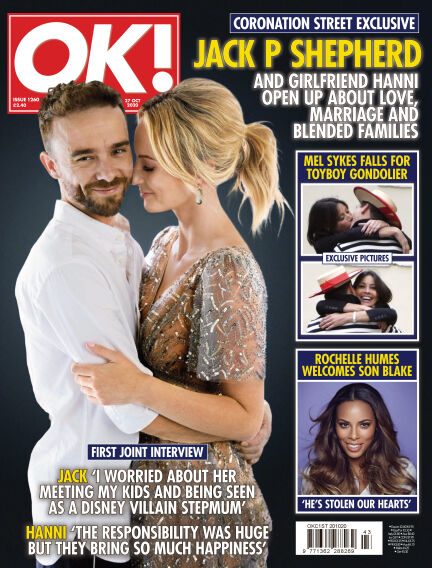 Enjoy OK! magazine and unlimited access to over 5,000 magazines on your mobile and tablet. All the magazines you can read for just €9.99 a month.

Explore all magazines
2 weeks for free
About OK!

OK! magazine celebrated its 20th anniversary in 2013, marking two decades at the heart of the celebrity market. It is widely acknowledged as a publishing phenomenon. The magazine is both aspirational and inspirational. It remains a powerful force in the celebrity market OK! sells 50 per cent more copies than Hello at the Newsstands every week. It is read by around two million people each week in the UK alone In recent times OK! has been invited to exclusively cover the five day wedding celebration of Wayne and Coleen Rooney in Portofino, Italy, the wedding of Saturdays singer Una Healy to rugby player Ben Foden in Ireland, Britain’s Got Talent judge Amanda Holden’s festive wedding to music producer Chris Hughes at Babington House, England Football Team Captain Steven Gerrard and Alex Curran at Cliveden Estate, TV presenter Holly Willoughby and TV producer Dan Baldwin and Amberley Castle and X Factor judge Gary Barlow and his wife Dawn’s star-studded 10th wedding anniversary celebration at London’s Mandarin Oriental Hotel. OK! continues to cover the most special moments in the lives of the brightest stars from around the world. In our popular Fashionista section we pick out the best dressed celebrities on the scene, showcase the latest fashion and beauty trends from both the runway and the high street in a four page exclusive weekly shoot, and bring readers style and beauty tips from the stars. Since launching in 1993 OK! has been committed to getting the very best World exclusives for its readers. It has developed a presence worldwide and now has 23 international editions including Russia, Germany, Middle East, China and Australia.

Unlimited magazines in the Readly app.